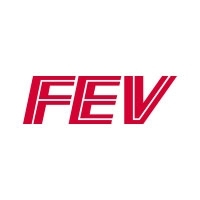 FEV Europe GmbH (formerly FEV Motorentechnik GmbH) is a German subsidiary of FEV Group GmbH and one of the largest independent development service providers in the world in the field of combustion engine development and automotive technology, with headquarters in Aachen. It designs and develops engines for equipment, passenger cars and commercial vehicles, but also for ships and locomotives - from roughing to production.

FEV has been operating its own fleet of electric vehicles since 2010. In addition to the development work carried out on around 65 propulsion projects, the FEV has completed around 20 battery projects in recent years, including high-performance rechargeable hybrid batteries cooled by water and a passive cooling system for purely electric vehicles. In addition, the FEV specialises in automotive electronics and technology as well as telematics and infotainment systems, and manufactures and operates measurement and test benches to test the strength, sound quality and emissions of engines and vehicles.